The Southern Highlands, also locally referred to as the Highlands, is a geographical region and district in New South Wales, Australia and is 110 km south-west of Sydney. The entire region is under the local government area of the Wingecarribee Shire. The region is also considered a wine region.

The region specifically is the area centred on the commercial towns of Mittagong, Bowral, Moss Vale, Bundanoon and Robertson as well as the historic town of Berrima. Smaller villages like Burradoo, Sutton Forest, Colo Vale, Avoca, Yerrinbool, Exeter, Welby and many more that make up the Wingecarribee Shire are spread in between and around these main centres and serve mostly as residential areas.

The Highlands geographically sits between 500 m and 900 m above sea level on the Great Dividing Range. Like other regions along this plateau such as the Blue Mountains to the north and the Australian Alps to the south, the Southern Highlands is known for its cool temperate climate.

Towns of the Southern Highlands

There are so many villages and towns dotted across The Highlands, each with their own personality and vibe.

From the bustling energy of Bowral and Moss Vale across to the historical elegance of Berrima, down to the casual, relaxed atmosphere of the southern villages and the jaw dropping natural beauty of places like Fitzroy Falls.

We went north, south, east and west to discover what each of them has to offer. Here are our highlights and some of our favourite things to do in each town.

The hub of the Highlands and home to one of Australia’s most famous (and picturesque!) cricket fields, Bowral is well known for its busy shopping vibe and an exciting art scene.

The bakeries are next level, the cafes plentiful and you’ve got your choice of bars and pubs.

There is also a super strong foodie scene in Bowral with plenty of well known restaurants playing host to locals and visitors to the Southern Highlands.

Mittagong is a fast growing and bustling town with a lovely mix of country style hospitality, funky stores and fab cafes.

Nature lovers are spoilt for choice with Mount Gibraltar a short drive away, Lake Alexandra Reserve an easy walk from the town centre and mountain biking trails up the road at Welby.

Head to Mittagong to find all the stores you’ll need for a home reno – from fireplaces and BBQ’s, hardware store, flooring, lighting, tiles, seating and beds…. it’s all there.

Moss Vale is stepping out of the shadows cast by the more well-known towns of the Highlands and has undergone quite the transformation in recent years.

Stunning lifestyle stores, fab cafes and restaurants, pubs, a super-cool taphouse and a strong creative community has well and truly put Moss Vale on the map.

Burrawang is a living and breathing example of what country life is all about.

The local pub has superb views of rolling hills from its beer garden, the general store moonlights as a café serving up super delicious food and a close-knit community keeps the country vibe of Burrawang fresh and energetic.

Perched on top of the Illawarra Escarpment, Robertson has a whole lot of country character mixed in with strong, farming foundations.

There is also a really strong creative community in Robbo with hubs like the SHAC providing a space for artists and designers to create, teach, exhibit and sell their work.

Bundy is one of the busiest of the southern villages in the Highlands, Bundanoon is well known for the annual Brigadoon event that triples the population of the town in one day!

Nature lovers are attracted by the stunning views of Morton National Park and the relaxed friendly village is home to cafes, stores and fortnightly markets.

The pool at the Bundanoon Hotel is also a local fave.

Cottage gardens, beautiful homes, a buzzing local hall, croquet club and picturesque park, Exeter is a gorgeous village with a busy general store and café, a lovely fashion and homewares shop, a fab antique store and a monthly village market.

While it’s a quiet town, it has a super-friendly community atmosphere.

A quiet village tucked away in the bush at the northern end of the Highlands, much of the community activity centres around the Memorial Hall and the themed monthly markets.

Colo Vale is also a favourite with train buffs thanks to the now disused but well-maintained historical train station.

Beautifully preserved, the historical town of Berrima is definitely easy on the eye.

Berrima is also home to plenty of cafes, awesome restaurants, a great country pub and one of the Highlands’ most-loved parks for the kids.

These southern towns are the place to be for those who love the great outdoors.

But head to the villages and pop into the local cafe and stores to support local. Or book in a round of golf at Sylvan Glen.

Most village activity centres around the sweet community hall where special events, musical performances and classes are held.

The small village of Sutton Forest is home to a fun pub, and the well-known Everything Store. Red Cow Farm is also a crowd favourite with over 2.5 hectares of stunning gardens. 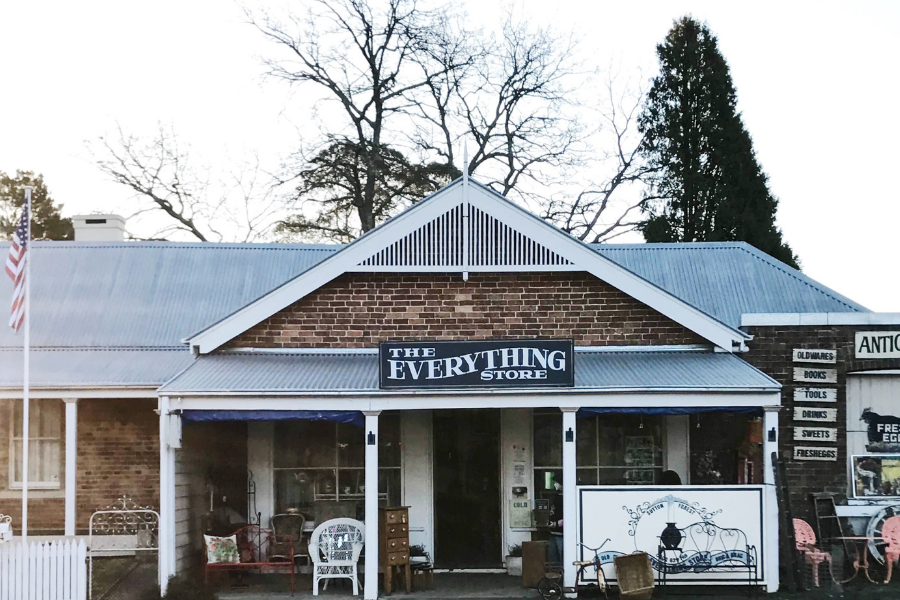 This place has such an interesting history. Once a busy industrial and mining town, the original historic Joadja town is heritage listed and is now in the process of being restored by conservation groups and history lovers.

There is a fab distillery on site, a nod to the Scottish heritage of the original mining inhabitants and if you’re keen to explore Joadja, there are regular tours and open days held.

Joadja is also home to a gorgeous winery and the popular Highlands venue, The Loch (well, technically The Loch is in Berrima but it’s on the way to Joadja!

The northernmost village in Wingecarribee Shire, Balmoral is a small town on the eastern side of Wilson Drive.

The Balmoral Village Hall, with its sweet garden, tennis court and playground for little ones [it was renovated by the Better Homes + Garden team in late 2020!], is the hub for local community and family events.

A tightknit community, especially after going through the 2019 – 2020 bushfires together, you’ll find the Balmoral Village Association and RFS actively fundraising, providing local support and opportunities to connect.

The natural beauty of Fitzroy Falls is a Southern Highlands showstopper.

The bushwalk high up on the Kangaroo Valley escarpment starting at the Visitor Centre offers up amazing views and a billion photo opportunities.

Grandpa’s Shed is a must do for bargain hunters and the Fitzroy Falls Reservoir picnic area has a fab kids’ playground.

Canyonleigh is also home to popular Highlands swimming spot, Paddy’s River – perfect for cooling off in the warmer months.

The community foundations of these two busy northern villages of the Southern Highlands, are rooted in their former and current roles as railway towns.

Hill Top is a former railway town known for its historical position on the original and now closed Picton Loop train line.

Yerrinbool is on the main line between Sydney and the Southern Highlands. Surrounded by bush, both towns have some great bush tracks – just check which ones are open after the northern villages were impacted by fire recently.

Yeah yeah we know this town is officially part of the Wollondilly Shire, but we love Bargo and it’s only JUST over the border, so to speak.

The local pub has a casual and fun atmosphere and hosts lots of very cool activites, and Bargo Sports Club attracts plenty of big name comedians and muso’s.

Bargo is home to a few heritage listed sites, including the Bargo Railway Viaduct which is worth a look.