The name Berri comes from the Aboriginal word ‘bery bery’ the description of the “big river bend” on which the town has grown. Up until the 1870’s the area was part of the Cobdogla sheep station and the home of the Erawirunga People. In those days it was just one of the hundreds of woodpiles along the huge Murray-Darling system, used by the riverboats for refueling.

The town was proclaimed and the first irrigation block allocated in 1911, which lead to the first permanent settlers taking up residence.

Berri has grown to be the major government service centre for the region and has developed a strong commercial hub, supported with extensive shopping outlets and a beautiful green riverfront complete with riverside dining  options.

There are plenty of natural landscapes to explore. The township is literally on the door step of the  Katarapko National Park and the towns Riverside trail leads you to the exquisite Martin Bend wetlands connecting with Berri Bridge Mural, Riverboat Interpretive trail and ‘A Special Place for Jimmy James’ along the way. Take a stroll, jog or ride your bike along the ‘Lion Allan Thurmer recreation trail’ and you’ll find plenty of stories about the local history and environment. 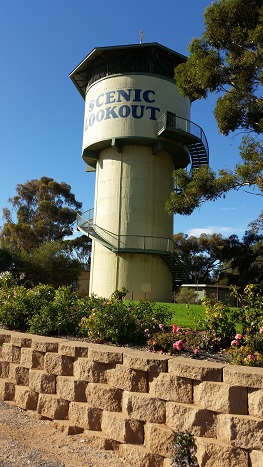 The Berri Lookout Tower has been formed by converting a disused town water tower into a lookout. Wonder up the 15.8 metre tower to get stunning views of the Berri Township and the Murray River.

Explore the floodplain and mallee by visiting Katarapko. This area is popular for all kinds of activities including camping, fishing, canoeing, bushwalking, bird watching and picnicking. There is a six kilometre Mallee Drive that takes you past a number of multi-stemmed trees, which indicate you have entered the mallee. Sand goannas, kangaroos and parrots may be seen resting or feeding along this drive. There are also a number of walking trails including; Kai Kai Nature Trail – an easy 30 minute walk; Ngak Indau Walking Trail – takes 1 hours; Cragg’s Hut Walk – an easy trail that takes one hour.

Tucked away underneath the Berri Bridge this mural depicts the Aboriginal heritage of the area. The mural is on a large slab of jarrah bolted to the underpass of the bridge with a circle of totem poles. The story of the mural is based on the Ngurunderi Dreaming story of the origins of the Murray River.

A Special Place for Jimmy James

Jimmy James (the second) was a famous blacktracker, who was born around 1910 and belonged to the Pitjantjatjara people. He moved to the Riverland in the 1940’s and took his name from his equally famous father-in law. He became a legend in his own lifetime when he was used extensively by the Police forces in South Australia, Victoria, New South Wales and the Northern Territory, to track felons, escapees and missing people. Jimmy passed away in 1991, and is buried at Gerard, the Aboriginal settlement near Winkie. The monument is sculptured out of two large slabs of black granite which are finely polished and engraved with images of birds and animals – a part of Jimmy’s spirit world.

You will find the fitness equipment along the riverfront from opposite Centrelink, near the playground and either side of the old ferry ramp.

Why not take a walk along the Berri riverfront and try the different fitness equipment which includes a sit up station, rower, leg press and dip/chin up station.

The magnificent Murray River meanders through the Berri Barmera district and is the lifeblood of the region. There are numerous picnic, fishing and camping spots along the river and in summer there’s always the opportunity for some great skiing. For more information contact one of the Visitor Information Centres.